Some programs are so damn good that you start to see them without any relation to the platform on which they run. In this case, you start looking for their substitutes if you are unable to use them on some platforms, often without success. In my opinion, one of the better combinations for video playback is Media Player Classic Home Cinema in combination with MadVR video renderer. It is rather hard to beat this combination, but there is a very good, open-source alternative available on Linux: mpv+SMPlayer. In this post, I am going to describe how I essentially repeated my configuration for high-quality video playback on Linux.

I believe that there is one thing worth noting: as both SMPlayer and mpv are available on Windows the information from this post might be useful if you plan to use these programs on Windows as well. I think that no additional adaptation required for this platform. The same goes for macOS.

I would suggest you keep the man page of mpv opened so that you can quickly read about the configuration options referenced in this post.

To improve video playback quality, we need the following:

In some cases, I am going to mention settings both for middle-end and high-end systems. In my opinion, the visual difference between them is so subtle that I would suggest that you go with the configuration for middle-end systems first, especially if you use a laptop. If you use a relatively modern desktop or do not mind extra battery drain and fan noise then go experiment with the configuration for high-end systems.

The first thing which we should set is a video renderer profile. There are many of them but gpu and gpu-hq are the ones in which we are interested the most. These, as you might have guessed, allow offloading most of the video post-processing and rendering to a GPU using OpenGL or Vulkan API. gpu-hq is pre-configured to use higher quality, more computationally intensive filters.

We may use Vulkan or OpenGL as a GPU API. Honestly, I have not noticed any difference in performance when playing a video using either, so I would suggest that you stick with OpenGL as the most compatible option. We are going to enable V-Sync as well.

If you want to use Vulkan instead, here is how to do it:

The next logical step is to configure smooth-motion. Here is how:

It is a good idea to enable dithering when it is necessary. mpv uses a fairly good dithering algorithm by default.

The last step is to offload video decoding to GPU when possible. It is especially useful for laptops. We are using auto-copy instead of auto to enforce copying back decoding results back to the system RAM. It might be necessary for some filters to work and helps to avoid some decoding issues at the expense of a relatively small performance loss.

Modern versions of SMPlayer can use mpv as its back-end without any additional configuration. However, SMPlayer tries to have mpv under its full control and starts it with --no-config option. It forces mpv to ignore its default configuration file. Fortunately, SMPlayer can pass user-defined command-line options to mpv, which allows us to bypass this limitation. To do it we have to use this extra option to force mpv to load its configuration file:

Here is the screenshot which shows us how to do it: 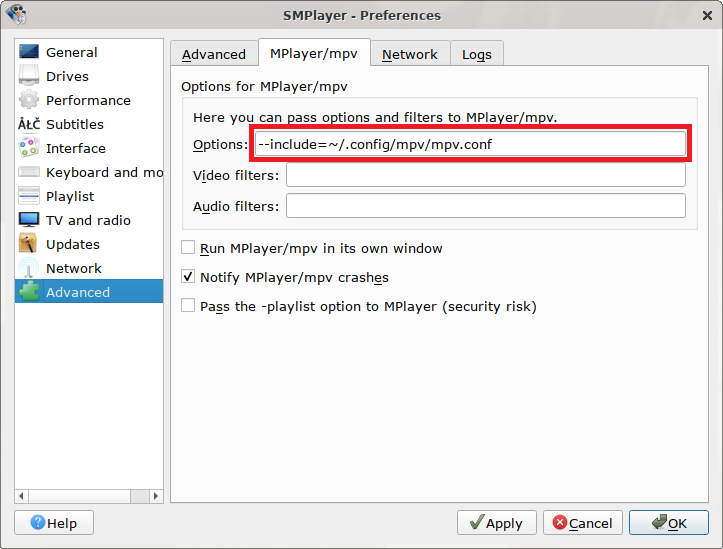 Please keep in mind that SMPlayer expects that mpv does not load its configuration file, so be conscious about what you have in the mpv.conf file.

Also, it might be a good idea to configure SMPlayer to use Default video output engine with disabled post-processing: 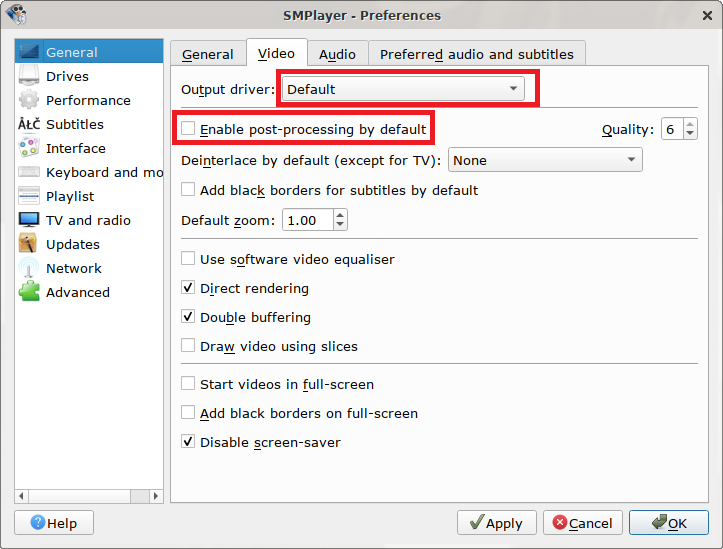 In this post, we have configured mpv and SMPlayer for high-quality video playback. I think that there are some things left which are worth noting.

Firstly, the video output quality depends mostly on the quality of the video files. No amount of configuration will make a miracle here if all you have is a low-quality media material.

Secondly, the quality of the display matters a lot. It does not necessarily mean that you should use these ridiculously expensive professional displays for high precision colour work. Adequately priced display with good IPS matrix will do. I doubt that you will see any difference on a low-end TFT monitor.

I think that these things are rather obvious, but I wanted to have them mentioned anyway.

Hopefully, this post will improve your video playback experience and make your entertainment more joyful.